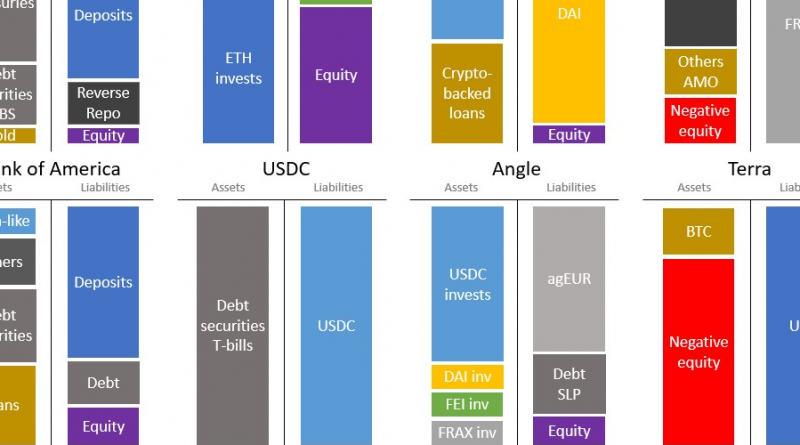 Decentralized finance promised a Cambrian explosion of nature of tokens. As we will see, we are still far behind TradFi. In this paper, the different source of on-chain funding will be presented with an analysis of pro and cons.

The most common source of funding is issuing a governance token and allowing people to buy it with a money-like instrument (stablecoin, ETH or more complex tokens).

An first exemple is the issuance of TRIBE at genesis. Most DAOs are raising capital this way with such IDO (Initial Dex Offering) or by selling on the private markets to VCs.

Another exemple is backstop mechanisms that protocol like Maker offers. When the system detect too much bad debt, it will automatically issue some MKR token (governance token) for cash (DAI, the MakerDAO stablecoin, therefore not getting funding per se but reducing debt).

A last exemple is how stablecoins like FRAX and UST are constantly issuing (or buying back, but not the subject for today) governance token when there is a stablecoin minting. Yet, as seen in the case of UST downfall, you can easily be mistaken in your ability to raise capital by this mean. As in the inelastic markets hypothesis, flows are big drivers of price. Having a $10B market cap, doesn’t mean you can raise up to $10B, it’s at least an order of magnitude less.

A stablecoin is a on-demandish (real or expected) liability that provide money-like benefits. Customer finding utility value in this liability, the cost is usually lower than another kind of debt.

This liability is on demand, but due to the actual or perceived utility of the stablecoin, the behavioral maturity is split between short and long term.

The key for stablecoin is to boostrap an organic demand (people using and holding the stablecoin as a liquidity preference).

While other kind of debts have mainly a cost that scale with the amount (the interest rate), stablecoin demand upfront fixed costs (marketing, integration, …).

As described in Crypto-Banking 101, one key component to drive stablecoin demand will be providing an interest rate on the stablecoin. It will still be lower than using straight debt as there is a utility yield for the customer/lender.

If the protocol own some valuable assets (like ETH), those can be pledged at lending protocols like Aave, Fuse and MakerDAO as a source of funding. This funding is described as a repurchase agreement (repo in short) but it is actually a secured loan (“a repo is a secured loan disguised as a sale”). We are considering here a on-demand repo where the repo last as long as no party want to close it (it’s a bilateral repo in the case of MakerDAO but an aggregated tri-party repo for Aave). When the lender wants to close the repo, he will increase interest rate (or the minimum collateral ratio) to a penalty rate, incentivizing the borrower to repay the loan to get his collateral back (or ending up liquidated).

Repo market can rehypoticate the collateral or not. For instance, if you borrow stablecoins on Aave with ETH, part of your ETH will be lent to other borrowers and secured by stETH. Using MakerDAO, the collateral is just escrowed and not used. The latter is therefore more secured but more expensive as well (as the collateral on Aave is providing some yield).

In both cases, there is a trust assumption on the repo market protocol. Governance usually has access to the collateral in one way or another (updating the contracts, messing with oracles, …). While expected to be safe, repo market have seen issues with oracles or liquidations.

Another risk with repo funding is the volatility of the interest rate which can fluctuate widely.

We can expect repo market rate to end up at SOFR + xxbps (SOFR being the repo rate of a Treasury bond). For new protocols or in period of stress, the repo market might provide the lowest cost source of funding. But, obviously, it demand to hold collateral to be pledged.

The repo market described previously is open repo. While usually liquid, it can still dry up quickly (and/or get very expensive). For financing longer dated asset, it make sense to increase the maturity of the liabilities as well. A secured bonds (or term repo, but we will focus on a tokenized and fungible version here) is a zero-coupon bond with a maturity date that keep some collateral in escrow. The collateral is sold at maturity or if the collateral ratio falls too low. Therefore, the lender don’t have to trust the borrower.

Example of such bond protocols are Yield and Notional. Currently maturities are going up to 1 year.

Just like open repo, being secured, the interest rate doesn’t take in account the credit risk of the borrower but just a small spread for the secured bond protocol risk. It also demand collateral that not all DAO would have. Borrowing at a fixed interest rate is usually more expensive but provide visibility.

The secured bond market is quite young, but should be quite promising as a source of funding.

Corporates bonds is a source of funding where the lender doesn’t get a strong security. While the stablecoin is the on-demand debt of the DAO, corporate bonds are all debt instruments.

They can be seen as secured by the governance token, but that is only correct when 2 conditions are met:

While stablecoin holders can redeem quickly and front-run a malicious DAO decision (like stealing the collateral), corporate bond holders are locked. The solution of using a timelock is not enough to bring safety on this front.

Example of in this direction is Porter (bonds for DAOs). Yearn, Polygon and Mana have (or had) loans taken on MakerDAO.

Revenue-based finance is a kind of debt where the repayment is taken directly from revenues. This sounds like a good fit for an on-chain protocol as such a mechanism can be implemented directly on-chain. In a way, Uniswap Liquidity Position are a kind of revenue-based instrument (and smart contract being immutable, it is very safe).

Angle protocol also provide such instrument with it’s SLP token. While in such a case it is a on-demand liability, actual redeemability depend on some conditions (contingent to protocol safety levels).

Overall, the corporate bond space is very early and complex to implement in a trustless way. I would argue that, currently, such corporate bonds are more based on trust than legal obligations. DAOs usually have a lot of control on their protocol and can change the conditions as they want (directly or indirectly). Either the space will move towards immutable smart contracts (which is risky and not very flexible) or will see addition of legal contracts. On the later, it could the addition of a trustee (kind of a security agent) representing the bond holders and having a veto rights on the decision of the DAO if it breaches some covenants defined in the bond issuance. It remains to be seen if a respectable corporate trustee would be able to take such a role (and the corresponding liabilities).

This funding is more detailed in the ClearingDAO paper. It is really just a way to solve the supply/demand temporary imbalance between stablecoin issuers (some stablecoin issuers having an excess of funding from their stablecoin while other having a funding deficit).