I have tediously insisted that the natural system of banking is that of many banks keeping their own cash reserve, with the penalty of failure before them if they neglect it.
Bagehot, Walter. Lombard Street : a description of the money market.

One particular interest I have is to make stablecoins fungible. I’ve been advocating for solutions, got fees removed for DAI (published the story of the DAI peg), and improved the peg of FEI. This article makes the case of the importance of DeFi stablecoin fungibility and provides initial thoughts on how to implement a decentralized clearinghouse, that is called ClearingDAO.

At its core, $1 should equal $1 no matter its form. It’s the basics of the name pegged stablecoin. To be money-like it should be accepted at face value with no question asked. It’s something that existed even 18th century Scotland or in some parts of the US (the Suffolk System) a bit later. If some private actors were able to solve this problem centuries ago, how could we not today?

It is already a reality for CeFi as FTX already embraces fungibility between USDC, TUSD, GUSD, USDP, and BUSD. All those are just ways to send US Dollars (notice USDT is excluded, as well as all DeFi stablecoins).

In their recent RealVision video, Raoul Pal and Darius Sit from QCP Capital discuss how banks in Asia are looking to get fungible stablecoins.

Therefore, the trend is clear, stablecoin fungibility will be a key feature in CeFi. DeFi needs to catch up to stay relevant.

Moreover, stablecoin fungibility is also key to unlock some DeFi usage. It is of prime importance for Real-World Assets but also

Some thought on a decentralized clearinghouse

Where we are now

My previous thoughts were based on a hierarchy of money structure managed by bilateral or unilateral arrangements. While such design work, there are two pitfalls:

The historical solution to this problem is to provide for clearing.

Having a protocol for DeFi stablecoins clearing would be a great advantage for DeFi stablecoins. Customers would be able to hold whatever stablecoin they prefer (from a risk/reward perspective, for a brand reason, for ESG concerns, …) and be confident to be able to use it at par. Such a ClearingDAO could have many shapes and properties but would solve temporary imbalances between stablecoins. We will consider that the interface would a simple swap interface.

To see how ClearingDAO would work, it would need to solve internal and external imbalances.

Internal imbalance occurs when one protocol is issuing more stablecoin than there is demand for it while another protocol is having too much demand and not enough supply. A good example is no other than MakerDAO which needs to rely on $5B of USDC to bridge the gap due to high demand (and comparative low supply). On the other end, Fei had to reduce asset exposure quickly during the last crash as their DAI reserves got emptied and the peg was at risk.

We will assume that each DeFi stablecoin can register itself to the ClearingDAO and provide its own stablecoins in significant volume (it doesn’t have to be limited to stablecoin issuers but it makes mainly sense for them). For instance, MakerDAO could deposit 100M DAI. This would not have any impact on DAI as at this stage no one can do anything. MakerDAO is the only actor able to deposit 100M and get nothing because the cost of capital of DAIs that are not in circulation is 0%.

Participants can also add other stablecoins than their own. For instance, MakerDAO could add 50M FEI that it owns. From there, we can allow people to swap DAI to FEI (up to 50M) and FEI to DAI (up to 100M).

This is not different from current PSMs. If we add another stablecoin issuer we can see how inefficient we become. In the representation below, MakerDAO owns 50M of FEI (i.e. extending a 50M free loan to Fei Protocol) and Fei Protocol is extending a 75M free to MakerDAO. We could be more capital efficient.

The intuition would be to net it with a 25M loan from Fei Protocol to MakerDAO. It could already be done trustlessly by MakerDAO getting back the FEI it owns from the contract, converting them to FEI, then adding the resulting DAI (or anyone with a flashloan).

So far we still haven’t addressed the motivation of entering in such a protocol and how to limit exposures in a multi-stablecoin system.

We can also add bilateral agreements with a non 0% interest rate and/or a non 100% collateral ratio. MakerDAO might agree to extend a loan facility to Fei protocol at 1% with a 200% collateral ratio and a 100M limit. We could imagine plenty of variations in the loan structure, but the important part is that both parties should agree to it.

It is also important to note that the 200% collateral ratio is not a limiting factor. Stablecoin issuers can mint as much of their own stablecoin as long as it is only used as collateral and not put in circulation. It is only limited by the risk appetite of stablecoin holders.

ClearingDAO should perform swaps in a way that limits debt exposures. While I haven’t explored much, it is probably a difficult problem with more than two actors and heterogeneous bilateral agreements. Some simplification might be required.

The key point of the protocol would be the ability to perform adverse clearing. Any lender can stop an agreement at any time (most likely with a notice period) and perform a liquidation of the foreign stablecoin loans (though the sale of the collateral it owns directly or as collateral).

External imbalances occur when, on aggregate, the overall demand for DeFi stablecoin fluctuates faster than supply. CeFi stablecoins tend to be backed by real assets like Treasury Bills only. It is not possible to mint them without a cost of capital. Even beyond this issue, it is also unlikely to get them as ClearingDAO participants.

Sadly, it would not be possible to work the other way around, i.e. having CeFi stablecoin providing loans to the DeFi stablecoin. We can only expect that, should a market opportunity presents itself, some actors will find a way to make a profit. Nevertheless, the current DeFi stablecoins issuers are still holding mainly short-term assets and should be able to shrink their balance sheet quickly if needed. So it might not be a huge problem for now.

While ClearingDAO solves an issue when an imbalance occurs, it should not only be seen as a lender of last resort solution. Imbalance can be a business decision.

Those are only initial thoughts to open a discussion and no real project is planned. 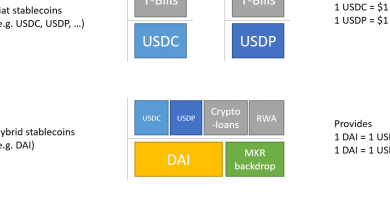 How to fix the par value of stablecoins