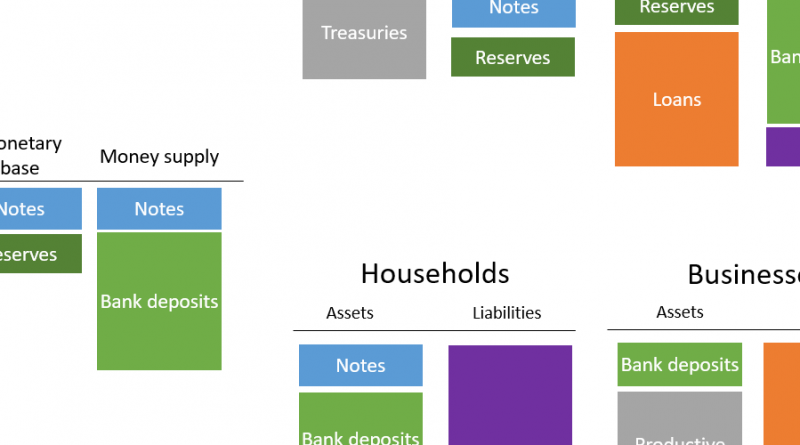 This article presents a simple and short case on why it is commercial banks and not the Fed that creates money and why it matters for stablecoins.

Lyn Alden made a lengthy post about it. You can also read the Perry Mehrling paper The Inherent Hierarchy of Money.

We will model a simple economy at the aggregate level. In our simple system, there is only 2 aggregate of money:

The diagram below shows an example of such a financial system.

The central bank hold treasuries (issued by the government and not represented here) and issue notes (including coins) and reserves. Our central bank will have no equity part. We also assume that the central bank can convert reserves to notes on demand.

Banks are holding some reserves to provide liquidity but are mainly extending loans to businesses. Banks are financed by equity (contributed by households) and bank deposits.

Households and businesses are holding the bank deposits and the notes. Households have financial investments in the form of treasuries and equity while businesses have productive assets. Businesses are financed mainly by banks loans. We use the term net worth instead of equity for households.

As you can see in the left part, the money supply is more important than the monetary base. This is called the money multiplier. Regulation can be used to limit or influence this money multiplier, for instance by making a legal reserve requirement (forcing the banks to hold a percentage of reserves).

Expansion of the money supply

In the diagram below, the households are selling their treasuries for bank deposits. As we can see the money supply increased while the monetary base remained the same. This illustrates the view that banks are creating money by expanding their balance sheet.

But what happens if the central bank expands its balance sheet?

As we can see, the balance sheet of the central bank is expanded and that is creating new money in the monetary base. Yet, it doesn’t change anything for the money supply or the rest of the economy. If banks don’t do anything, nothing happens.

Sounds strange? Well, look no further than what happened with Quantitative Easing in 2008. The monetary base increased sharply (x2), but M1 (our money supply) didn’t change as much.

As we have seen, it is commercial banks that are creating money. Reality is obviously more complex as the government can be more active than in our short presentation. Nevertheless, a balance sheet view is always useful to understand what is really happening.

The direct conclusion is that if stablecoins are seen as money (usable for payments) AND the stablecoin issuers aren’t backed only by money (money base or money supply) THEN there is monetary creation.